Thanks to Kieron Summers for writing this guest post for us. You may recall last year, he kindly wrote a post on his experience of winning the Dartmoor Discovery Ultra 2021. This was his experience this year…

Going into this year’s Dartmoor Discovery Ultra (DD), managing my own expectations was a larger challenge than usual. In my three previous attempts at the DD I’d finished second on debut, when my primary objective was to finish, and have won the race twice. Each time aiming to break 4 hours and see where that left me in regards to finishing position.

Would I Even Make the Start Line?

Deciding what to aim for this year was a different story, coming as it did against the backdrop of my worst injury in 10 years of running. Due to a combination of plantar fasciitis and a post tibial tendon issue, I’d missed a large chunk of winter training and my subsequent return was restricted in terms of mileage and intensity. Even less than 3 weeks from race day, my participation was in doubt, whilst the injury was 90% healed, running down hills was still painful, and there’s a fair bit of that involved at the DD!

We all have some level that we’d like to achieve when racing. Our expectation of ourselves! To my mind this is vital, not only so that we can measure relative success or failure after the fact, but also to give us an aim come race day.

We can choose to keep this aim private or share it with others, who may not agree with us – thinking we’re selling ourselves short or overreaching. Ultimately, what others think is largely irrelevant, what we think ourselves is all that really matters. Allowing others to influence our thinking, second guessing ourselves, is rarely helpful in my experience. There was social media chatter about a DD hat-trick for me, I can’t say I’d have been comfortable with this, even if I hadn’t been injured. The course itself doesn’t really allow you to presume too much, and the front end of the field looked stronger than the last few years.

I had to decide: stick, twist or fold?? Take it relatively easy, just hoping to finish; race as if the injury hadn’t happened; or do not race at all. Essentially complete, compete or delete?

Pride meant not competing was immediately discounted, I decided racing, but aiming to manage effort for the first 13 miles, which is predominantly downhill, was my best option.

This would hopefully leave me to consolidate over the hilliest section, from Ashburton to Postbridge (13-27 miles) where I’ve traditionally been very strong, and then endure the last section back to Princetown, ideally to finish in under 4 hours – on paper a great plan.

The reality was massively different; all went well over the first section, running together with Rob (third finisher in 2021),  we sat about two minutes back from the leader, Ryan, at 13 miles. We continued to run well for another 5 miles or so before the wheels fell off rather spectacularly for us both. Ryan went from strength to strength, going on to win by around 15 minutes. A superb performance, whilst I steadily fell away, my hip flexor screaming at me and becoming increasingly painful – the result of a lack of conditioning usually gained in those missed long training runs. My plan to endure the last 5 miles was way off, I was destined for 14-15 miles of this level of discomfort.

Holding on For Third Place

This in itself didn’t overly phase me (or fill me with joy). We’ve all endured before, we’ll all endure again. So, I persevered along those long undulating stretches, slowly losing my lead to Dean in third until 50k where, still 150 yards ahead, I have to say I physically and mentally capitulated. Slowing to a walk I had no fight left and had to watch Dean as he powered by to a well-deserved second place. I’m glad to say I managed to hold on to third place, thereby completing a ‘podium sweep’ of first, second and third at this iconic race, something that I’m quite proud of, despite my initial disappointment at my performance.

On reflection I’m left with three main observations of this years’ experience: the level of organisation and friendliness of marshals, many of whom greet you by name, is second to none; the community spirit engendered by the DD is stronger than ever. I’m especially grateful to Dave ‘Tommo’ Tomlin and Sian Longthorpe, both former winners, who cycled and drove the course, providing incredible moral support to the competitors throughout; and finally that deciding to race an ultra, instead of managing my expectations a little better given the preceding few months, probably wasn’t my wisest decision.

Every day’s a school day eh?? 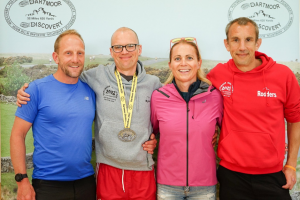 We use cookies on our website to give you the most relevant experience by remembering your preferences and repeat visits. By clicking “Accept All”, you consent to the use of ALL the cookies. However, you may visit "Cookie Settings" to provide a controlled consent.
Cookie SettingsAccept All
Manage consent

This website uses cookies to improve your experience while you navigate through the website. Out of these, the cookies that are categorized as necessary are stored on your browser as they are essential for the working of basic functionalities of the website. We also use third-party cookies that help us analyze and understand how you use this website. These cookies will be stored in your browser only with your consent. You also have the option to opt-out of these cookies. But opting out of some of these cookies may affect your browsing experience.
Necessary Always Enabled
Necessary cookies are absolutely essential for the website to function properly. This category only includes cookies that ensures basic functionalities and security features of the website. These cookies do not store any personal information.
Non-necessary
Any cookies that may not be particularly necessary for the website to function and is used specifically to collect user personal data via analytics, ads, other embedded contents are termed as non-necessary cookies. It is mandatory to procure user consent prior to running these cookies on your website.
SAVE & ACCEPT
Go to Top