How to Help Avoid Falling Over While Trail Running

Home/Help & Advice for Runners, Trail running/How to Help Avoid Falling Over While Trail Running
Previous Next

How to Help Avoid Falling Over While Trail Running

Unfortunately, the hazards of falling over while trail running are all too real. I’ve been running for six or seven years now and have taken a few tumbles but most of the time nothing of any significance. Each time it has been for a different reason and only once has it left me black and blue and shaken. That’s my experience and I have been lucky however, I have seen some pretty bad falls including one where my friend broke her jaw. Not that I want to put you off but it felt like a good idea to write about best practise when falling over while trail running, how you can avoid/prevent it, and what you should do once you have taken a tumble.

You Don’t Forget That First Fall

The first time I fell over while running off road was looking at a beautiful view while running and tripping over a cow pat – true story! Luckily I did not land in said cowpat. Lesson – stop to admire the view, don’t carry on running while looking at it. Better still, stop and get a photo of it to admire later too. Funnily enough, this wasn’t the last time I committed this error! Only the other day I fell while pondering why there were cows in a field that is usually full of donkeys! I still have a scar on my knee to remind me of that first fall.

Falling Over While Night Running

I have also taken a couple of stumbles during night runs too – the first time my foot got caught in a bramble and down I went. Got up, brushed off the mud and carried on. I was fairly new too head torch running, I think it was my second time. The hazards of running on slippy paths at night time.

Invest in a good head torch for night running

The worst time was when, after some time away from the trails, I was excited to get my head torch on and head out on an evening run with the Thursday night crew. Despite not having done much trail running for a couple of months, I was feeling really strong as I powered up the hills. This was thanks to a recent spate of road marathon training which had improved my endurance. I was happily trotting up the hills thinking how great it was to be out again. It felt so good that I thought I was strong enough to chase two of the faster guys down a rocky path… you can see where this is heading…

And Then All of a Sudden…

One minute I’m grinning like a Cheshire Cat enjoying the feeling – the next – bang. My chin hit the deck! I felt the impact as it jarred up through my jaw knowing this time I had gone down bad. I lay there on my front assessing the situation as everyone in front and behind gathered around to make sure I was OK. There was a lot of the red stuff – my thighs looked like they had been grated and my jaw was throbbing.

Disclaimer: Our posts may contain affiliate links. We may earn commissions if you shop through the links on this page although we only ever recommend products that we genuinely believe will enhance your experience.

What happened next was the assessment stage. I hadn’t had time to prepare myself for the inevitable landing as it happened so quick but very quickly I had to work out what was going on:

As my fellow runners checked all of these things, I got my breath back. The next stage was shock. A bit of a wobbly lip it was time to pull up my big girl pants and be brave.

I knew I hadn’t hit my head and that nothing was broken. I now needed to get back up and to my car. Everyone was great. We walked, then we jogged then we took it steady back to the cars.

I was OK – shaken but not stirred.

Here are the thoughts that went through my head on that drive home: 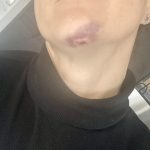 My chin 2 days after 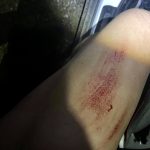 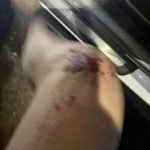 A cut and bruised knee

It’s all very good reflecting and saying ‘what if’, all you can do is address the facts though and try not to think about what might have happened.

Now, two days later, my chin is black and twice the size – my jaw aches, my thighs and knees are cut and grazed and I have a few other bruises coming out. Even as I type, I can feel a bruise in my thumb joint and one of my fingers is bruised and swollen. I am going running tomorrow though and it will be off road!!!!

I have been walking around with a scarf on to hide my chin and have been grateful to wear a face mask in shops. While I am keen to hide the obvious bruise from the general public, I decided to put pen to paper in a blog just to offer a little insight into what to do and how to deal with falls, starting with how to prevent them.

Why Do We Fall When Running?

Falling over isn’t exclusive to running. We can trip up the stairs, tumble down the stairs, trip over when walking along… there are so many opportunities to lose our balance and fall but why so much falling over while trail running? There are a number of reasons including:

While we can’t remove all of the hazards, what we can do is exercise caution and techniques to avoid those trips.

How to Prevent Falling Over While Trail Running

Please be warned, sometimes you are going to stumble or fall and there is little you can do about it. The trick is to minimise both the chances of falling and the impact. You can’t prevent ever falling over but you can be more prepared for the eventuality.

What a strange title, right? How to fall when trail running. In this instance, I couldn’t stop or try and break my fall as I didn’t realise what was going on until I’d hit the deck. There have been times when I’ve been able to change the outcome, right myself and prevent a full on fall with balance and well placed arms. Falling over while trail running is often unavoidable but minimising the impact and injury is possible. 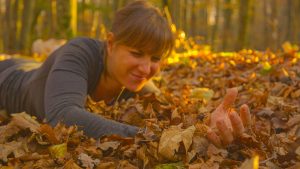 If you feel yourself going down try and control your fall. Instead of your face meeting the trails, go for putting your hands out to support you.

Fall Up Not Down

Silly as it seems, try and fall up rather than down. This may mean leaning towards a verge that goes up rather than the edge of a path with drop off. Try and look for a softer spot to land.  It always possible when you have very little time.

Cue Oasis song playing in my mind now. Try and roll with it. Rolling into your fall rather than stiffening up and landing awkwardly will help make the fall less painful. Go with it. If you feel yourself falling awkwardly, rather than trying to prevent a twist, just go with the flow. Try and relax when you fall over and try to naturally land rather than tensing.

The Kit You Need After a Fall

You’ve fallen over, are covered in mud, bleeding and feeling just generally crap. You may have even landed in crap. Always keep the following in the car:

Don’t Let it Put You Off Trail Running

Like riding a bike and falling off, you have to get back on again. Don’t be put off by falling over while trail running. Statistically, we are far more likely to have a car accident than fall over while running. Don’t let it put you off. In my case, I got back up and completed another 3 miles. Not saying you will be able to if the fall is really bad but don’t let it stop you running. If you aren’t broken then get back out there. The following day was a rest day for me anyway but I will still get out on my planned Sunday longer run and enjoy everything the trails have to offer.

Have you fallen over while out on the trails? What are your top tips?