Whenever someone asks me about the Fenix 6 watch and which one I purchased, I often find myself being asked various questions about the size, price and its various features. The Fenix 6 series is, as the name suggests, a group of watches with different features, at varying price points, in a range of colours and styles. To be honest, it can all be a tad confusing. Questions arise like – ‘what’s the difference between the 6X and the 6S?’ and ‘why is that one more expensive than this one?’ To try and answer some of your questions, we decided to write a guide to the Garmin Fenix 6 range without all the tech guff – just plain and simple layman terms which tells you what you need to know. If you are looking for a trail running watch, and considering the Fenix 6 range, read on to discover which one might be the most suitable for you.

The links that we will refer you to are for the official Garmin store on Amazon – not a reseller. We may earn a commission if you use any of the links to make your purchase. We will only recommend bonafide, trusted products that we have used ourselves.

One of the main differences in the Garmin Fenix 6 range is the size of each model. In the main, the most noticeable difference other than the bezel or watch colour is the size of the screen. 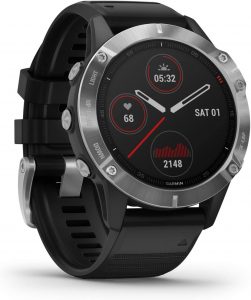 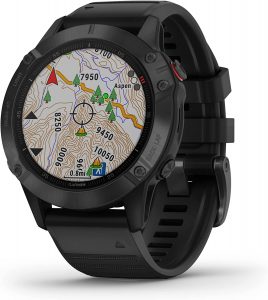 The following times are how long the battery is expected to last in the various modes – GPS while running, GPS+ music and the watch being used in smart mode.

There are 5 different models in total – each of the 3 sizes – 6, 6S and 6X all having various models. Look at what is written after the 6, 6S or 6X to determine the model

The Silver model is the lightest and with the least features. It should be noted that it DOES NOT HAVE the following features which could be a major consideration when you purchase one of the models within the range. If you plan on running self navigation ultra marathons, this may not be the trail running watch for you – especially if you are going to rely on the built-in map feature which this model does not have.

The standard edition of the Garmin Fenix 6 with all the advanced functions that you don’t get with the Silver edition. It also has the Corning Gorilla Glass that you will find in most Garmin watches.

The difference between the Sapphire and the Pro is the screen glass. This particular model features scratch-free sapphire glass.

Almost identical to the Sapphire model however the crown is made in titanium. This makes the watch lighter than the Sapphire.

If you want to extend the battery life of your watch then choose the Pro Solar version. It has all the same functions as both the Pro and Sapphire models but the difference is the glass is solar powered allowing you to run for longer. This is the kind of watch you want if you tend to compete in 24 hour or longer ultra marathons.

The Garmin Fenix 6 comes with a pre-installed topographical Europe map with a real turn-by-turn navigation. It’s similar to what you would expect from the standard driver’s sat nav, recognising street names, landmarks etc.

The Garmin Fenix 6 will pick out the popular routes and roads that other Garmin users use.

The watch also features Pace Pro which allows you to programme in how long you want the route to take you. Based on the time you give it, and what it knows about the terrain (elevation etc), it will calculate the pace you should be running the different sections art.

For those who really love their stats, it will also calculate your pace based on a negative split strategy.

Below you will find a list of all Garmin Fenix 6 models. As you can see there are a number of models all in different colours.

The model in the Garmin Fenix 6 range that you choose will depend on your individual requirements as a trail runner, and what other exercise you participate in. If you tend to run a lot of self nav ultras on tricky terrain and need a decent battery life, your choice will be different to that of a hobby trail runner that likes to hit the trails for a few miles on the weekend. You may also have a size preference – preferring a smaller watch if you have smaller wrists for example.

All of the differences aside, there is no denying that the Fenix 6 range is the king among trail running watch and the Garmin range in particular.

We use cookies on our website to give you the most relevant experience by remembering your preferences and repeat visits. By clicking “Accept All”, you consent to the use of ALL the cookies. However, you may visit "Cookie Settings" to provide a controlled consent.
Cookie SettingsAccept All
Manage consent

This website uses cookies to improve your experience while you navigate through the website. Out of these, the cookies that are categorized as necessary are stored on your browser as they are essential for the working of basic functionalities of the website. We also use third-party cookies that help us analyze and understand how you use this website. These cookies will be stored in your browser only with your consent. You also have the option to opt-out of these cookies. But opting out of some of these cookies may affect your browsing experience.
Necessary Always Enabled
Necessary cookies are absolutely essential for the website to function properly. This category only includes cookies that ensures basic functionalities and security features of the website. These cookies do not store any personal information.
Non-necessary
Any cookies that may not be particularly necessary for the website to function and is used specifically to collect user personal data via analytics, ads, other embedded contents are termed as non-necessary cookies. It is mandatory to procure user consent prior to running these cookies on your website.
SAVE & ACCEPT
Go to Top