How to Deal with Cows When Running

Home/How to.../How to Deal with Cows When Running
Previous Next

How to Deal with Cows When Running

Running through a field of cows has always been something that has made me extremely nervous. I have been chased by boisterous cows and I have found myself being circled by a group of curious cattle. Recently though, a local farmer has joined us on our Thursday night runs and I have watched her deal confidently with cows first hand. It was following one of our recent runs, where we were discussing how to deal with cows when running, that I was inspired, with her help, to write this article.

Around the same time, I read a report of a nearby hiker getting seriously injured by a cow on one of our local running routes. He ended up in hospital with some nasty injuries. Then I saw another Facebook post where a woman had been trampled. Previously, while I had been nervous of running near cows, I hadn’t really considered just how much damage they can do. So, is it safe to run near cows or should it be avoided altogether? Is there a way to run safely when there are cows in your path? We offer our advice on how to deal with cows when running, thanks to our local farming friend. 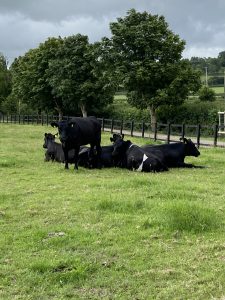 Ask yourself first ‘do I need to cross this field/path?’ If you can find an alternative route, especially if you have a dog with you, then do. If not then just beware that you are doing this at your own risk. If you do get into trouble, how far from home are you and do you have a phone? A phone isn’t going to be much use for getting someone to rescue you but it certainly will if you were to get injured.

You also need to ensure that you are sticking to the public footpaths – if you aren’t then you are likely to be trespassing. There will be signs on some fences, especially when there are bulls or cows with calves to warn walkers and runners of the potential risks. You will be asked to keep dogs on leads, and you will be warned of the dangers.

How to Cope with Different Scenarios

From a lone bull to a field of many cows, with or without calves, there are many things to consider.

Running Through a Field With a Bull

When it comes to public rights of way, it is an offence for a lone bull of over 10 months to be on its own in a field that is crossed by a public right of way. Keeping a bull of a recognised dairy breed, whether alone or accompanied by cows/heifers, on a public right of way is also an offence. HSE recommends that signs should be displayed at every access point warning that there is a bull in a field.

Where there is a bull in a field, you enter at your own risk whether it is a public right of way or not. Bulls are unpredictable and aggressive. They are less aggressive when they are surrounded by females but on their own they are more dangerous. They don’t need provocation either and can attack without warning. Their primary goal is to get you on the ground, at which point you really are in trouble. Still want to run through that field with a bull in it?

Cows and Their Young

While a bull is considered the most dangerous to encounter, you certainly do not want to come between a cow and her young. Positioning yourself between the two is asking for trouble. Entering a field of cows with calves is risky. That’s not to say that it’s impossible. Many times we have entered fields with cows and their calves. We don’t run with dogs, however, we do slow down to a walk. We walk carefully around the calves trying to keep as much distance between us and them as possible.

Young male cows are curious beasts and they want to play! These are the cows that start to get a bit jumpy when you approach them and chase you as you run past. They will inspire many to search the term ‘how to deal with cows when running’.

Often, a group of young cows will huddle together and then follow you. This can be very intimidating but don’t worry, they are just being nosey so keep moving. If you are in a position where you have nowhere to go, turn and face them, make noise, shout or clap. If the cattle are running towards a fence, electric fence, hedge, corner or small space then stop immediately. You will get injured if they chase you into a corner. 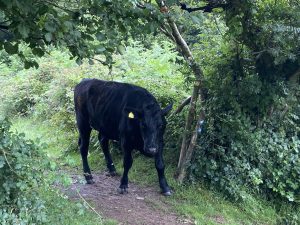 When running with dogs, keep them on a lead around any kind of livestock at all times. Only if you are chased and feeling threatened, can you let the dog off the lead immediately. Dogs and livestock are not a good combination and dogs can chase cattles and sheep with devastating consequences. If you are walking your dog, consider not using the path or make sure you keep them close and under control.

If your dog fouls anywhere – pick it up and take it home. Don’t leave it on a nearby branch in a dog poo bag and don’t kick it into a bush – you don’t know who will come across it.

Summary of How to Deal With Cows When Running

Close gates! When you enter a field or exit it, make sure you close the gate. You do not want to be responsible for the harm caused by escaped livestock. Even if you can’t see livestock, close the gates anyway

Leave Only Your Footprints

Don’t drop litter in the countryside. Pick it up and take it with you. We often come across empty wrappers and drink cans and bottles. Where we can, we pick them up and take them home with us. There are also organised litter runs where groups will take a rubbish bag out on their run and use the miles to clean up the countryside.