In the early days of trail running I didn’t know much about shoes. I knew I needed a pair of trail shoes but I didn’t have a clue what was right for the terrain, what was the best brand and what I should be looking for. I had heard people talking about Salomon, Saucony and inov-8 trail running shoes but it was all just a foreign language. Like road shoes, I kind of just took a punt with my first pair. They were a lower priced brand and I bought them for a race that all my mates were running.

At this stage of my relationship with running I absolutely hated mud (I can’t believe that statement now). Anyway, the race I signed up for was the Sodbury Slog, approximately 10 miles of sheep dip, rivers, trenches and not a race for the faint-hearted. FOMO (fear of missing out) was my sole motivation for taking part in this race and it was a last minute purchase on Amazon that saw me grab any old pair of trail shoes a couple of days before the event. Needless to say the shoes hurt, I got blisters, one came off in a particularly muddy trench and it was miserable. However, I absolutely loved it. So much so that I signed up for the following year as soon as I could.

The Start of a Beautiful Relationship

It was a while before I hit the trails again. As a new runner I was still obsessed with road half and marathon training and wanted to see if I could beat the illusive good for age barrier which at the time was 3:50 for my age and gender. Anyway, having got that out of my system, my first run back (after hitting good for age) was on the Mendip hills. That turned out to be the last road marathons that I did. After that I spent every Sunday exploring the trails of the Mendips with my new running buddy who will always be accredited with introducing me to my new found passion.

Running the trails meant investing in a decent pair of trail running shoes. This time I spent my time researching and upon recommendation I ordered a pair of inov-8 Roclite. They were a revelation – I always thought trail shoes were supposed to be clunky and uncomfortable and were supposed to hurt. These were amazing. My first ultra was a 30-mile off road local race with 5000 feet of elevation. When I took my shoes off at the end I didn’t have a single mark and they were comfortable from start to finish. Comfortable trail running shoes, who would have thought it. 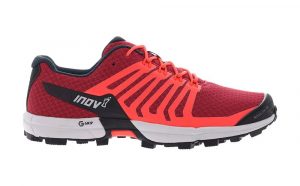 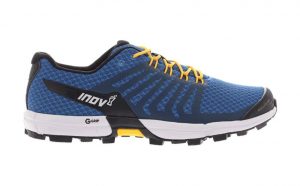 Disclaimer: Posts may contain affiliate links. We earn commissions if you shop through the links on this page. We also promote other products that we have tried and tested via other affiliate programmes. 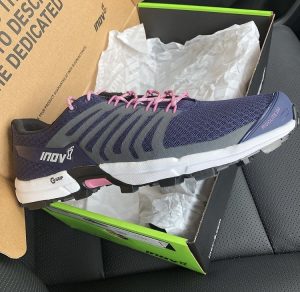 Next it was time for running a longer ultra (as you do). For this I decided to buy another pair of the same (why change right?) and started training in my second pair of Roclites. They were great while the weather was good or the ground was frozen but once the rains came, and the trails became muddy, they didn’t really suit the terrain. They were too light and didn’t have enough grip to cope with the mud. It’s worth pointing out that there probably isn’t any shoe that will cope with the amount of mud that Somerset has to offer during the rainy season but it certainly wasn’t a job for the Roclite. Even so, they were extremely comfortable and so I continued to run in them.

It was during a particularly wet and muddy trail run after I tool quite a tumble that I decided to take a look at something with more grip. Time to do some more research. Running with a friend who had just bought the Mudclaw 275 got me thinking that if the inov-8 Roclite were so comfortable then surely inov-8 trail running shoes were the most suited to me and the Mudclaw would be the ideal solution. I order a pair and went straight into a long run of 15 miles without breaking them in. I didn’t envisage there would be a problem and apart from them being slightly tighter than the Roclite, there were no blisters or sore feet. 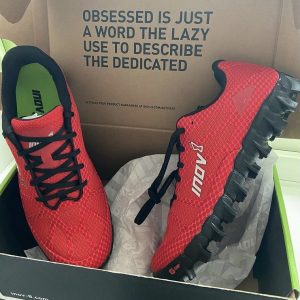 Fresh out of the box

A Sturdier Shoe with More Grip

The Mudclaw is a slightly heavier shoe. The lugs are much more obvious and the shoe is sturdier. Where my Roclite would develop a hole on the toe box after a few hundred miles, the Mudclaw are more robust. The wide toe box of the Roclite however doesn’t seem to be quite the same on Mudclaw and they do pinch a little on one side to begin with. After a few runs this subsided and it wasn’t bad enough to make me reconsider my choice. The first run in them was a little unnerving – new shoes have a slippy sole and coming down some wet rock I did question my decision to choose this shoe. By the next run though, the shoes had lost that slippy new effect. 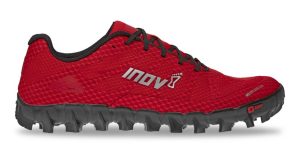 Top tip – try and scuff up the bottoms of your new shoes a little before wearing them in the wet. Take it a little easier on that first run in new shoes.

One thing I have always loved about inov-8 trail running shoes is the drainage. I can run through the deepest puddles in the most freezing of conditions and within half a mile my feet no longer feel cold and wet. They drain well and don’t hold any water. The Roclite do tend to clog up more than the Mudclaw though, that said, I think any shoe, with enough mud, will clog eventually.

Where the Mudclaw Wins

But here’s where the inov-8 Mudclaw 275 really comes into it’s own – in the mud! Wow. Watching my training buddy slip and slide while I ran straight over the mud proved that they do the job they say they do. This is great because there is so much mud to contend with. In fact, we have pitched the Roclite against the Mudclaw on more than one occasion.

I went out running with another friend recently. It was a day that started with a heavy frost and at 10am it was rock solid. At first we were pretty evenly matched on grip. However, as the ground began to thaw we really started to notice the difference in the grip afforded by the two pairs of shoes.  He’s considerably faster than me and can really nail a climb leaving me standing but there were a couple of places where I was hanging on to the back of him as he was sliding around.

You Can Nail a Descent in the Mudclaw

The Mudclaw really did outperform the Roclite on this occasion and it was no coincidence that I was able to stay on my feet. He won’t thank me for pointing out that he ended up falling over on a slippery path. When it came to the muddy down hills, wearing the Mudclaw 275 meant that I was able to nail the descent with confidence whereas he was coming down a little more gingerly and struggling for grip. I was flying down that hill faster than I have ever ran in any other trail shoe. Before I was always a bit nervous that I didn’t have enough grip.

Where they don’t really work as well is going from mud to road – they are OK for a short stretch of road but they aren’t really a hybrid shoe. They will however help you scale that slippery climb like a mountain goat. 12.5 of combined terrain for example really makes you feel the pounding on the balls of your feet come the final few miles. The Roclite however can go on and on offering comfort and support.

Bottom line… if you have to run on very muddy trails – buy them. If you don’t and are more of a fair weather trail runner, check out the Roclite. Even better, buy both of these Inov-8 trail running shoes. I have both and I wear the pair which best suit the conditions. My Roclite are more of a summer shoe for me although they are very comfortable.

To check out our rundown of the best trail running shoes for cushioning, stability, low profile and more, visit our page: