I’ve been running trail for years, mostly local stuff around the Mendip Hills, venturing over to the Black Mountains on occasion and running various routes there. I’ve always been blown away by the beauty of the landscape and the sheer size of the mountains, in comparison to the local hills. They can be intimidating, especially when you are running with the crew that I run with (all who are all quicker than me). That said, I’ve always found it as challenging as it is rewarding. The work is harder but the rewards are bigger. I have researched, written about and heard many stories about running a fell race so, I thought I would see for myself what it was all about.

What is a Fell Race?

I’ve run hilly races that can be classed as “fell” races. Not what I’d call “proper” fell races though. When you consider that the word fell is from the Swedish word fjall that translates as mountain, and that it actually means above the tree line, you imagine something with some pretty impressive elevation. Most fell races take place in the Lake District – the birth place of the sport where guides and shepherds used to race each other up the various fells.

I’m working my way up to a trip to the Lakes, it’s quite a way to travel but many of my fellow runners have entered races there. In this first instance though, I thought I’d head over the border into Wales and try a Brecon fell race.

I probably wouldn’t have entered off my own back. It took a friend of mine, who had a fair bit of experience running races like Snowdonia and Cader Idris to persuade me to try Fan Y Big. Being all brave and self assured I decided that for a tenner, I’d give it a go. So, I entered and I had weeks before I had to worry about it.

The “What Have I Done” Moment?

Luckily I was just off the back of a 56 mile hilly ultra so I had the miles and the elevation in my legs and was feeling fit. What’s the worst that could happen? There is the fact that rather than a few hills and not much more than 1000 elevation in a local trail run, I was going to have to summit a mountain. An actual mountain – like not a small hill that goes on for max half a mile but an actual real life mountain that summits at over 750 metres! That’s 2000+ feet in old money! The race was 10 miles – it was 4.5 to the summit. 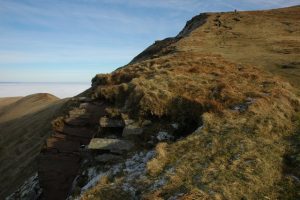 The final ascent to the summit 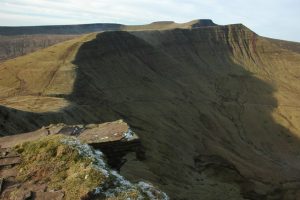 The horseshoe after the summit

As the day drew closer I start actually worrying a little. I’ve heard stories of fell racing being  a sport for serious, proper hardcore runners that don’t use GPX and that there are unspoken rules and traditions of the sport. I imagined turning up and everyone looking at me and realising that I was a phoney and that I wasn’t a proper fell runner.

What If I Get Lost?

My next worry, and my biggest, was that it wasn’t marked like a trail race – you needed a map and compass! Apparently, I was going orienteering as well. What if it was misty – what if I got lost? What if I got lost at the back of the pack? It really did bother me – especially a few days before but I had committed and I was more scared of the retribution of not making the start line than being found at the bottom of a drop off.

So… I pulled up my big girl pants, did all the preparation, made sure I had my safety kit and picked up my race number. I nervously looked around and thought that everyone looked like they knew what they were doing. But so did I – I’m an ultra runner, I’ve run mountains before, I could easily cover the distance. Then I was told there was a cut off – an hour and a half to the summit – 4.5 miles. So that was my aim – reach the summit by the cut off, don’t get lost and finish safely.

How the Race Unfolded

The starting horn went and I had that early race nervous feeling in the pit of my stomach. I just slowed right down and took it easy. What followed was perhaps the best ten miles I’ve ever ran! The first mile was easy – no climb just pretty flat trails. Then the second mile was a little undulating but nothing to perturbing. In fact, as I got into the swing of it, I started to relax and catch up with people in front, overtaking 5 or 6 in that first couple of miles. I then started the climb. Here I was running a fell race – an actual real one!

The first climb is steep and takes you to about half the total elevation. I ran a bit but I wasn’t sure how brutal the climb would be so I walked more than I ran. I got running again just before the top of this climb and settled in again. Mile 3 was my slowest but I was still on 42 minutes so I had 48 minutes to cover a mile and a half to reach the cut off. The ground was hard going on the next fairly flat stretch of terrain. It was boggy and it was quite hard to navigate some of the ditches. The further I went, the closer the summit of Fan Y Big looming ahead of me. I had to chuckle as I could see people climbing in the distance and reaching the summit – some of them  seemed to be scrambling a little towards the the top. Ha – it’s fine – I can totally do that.

On I went – one foot in front of the other on to the steepest part of the race now. Half an hour to go and making good progress. As I neared the top of the summit, I grabbed hold of some foliage and hauled myself up onto the ridge where I swiped my chip band at 1:08. I summited with another girl whose first fell race it was and we had a couple of minutes of running together before I had to focus and navigate the terrain around the horse shoe. It was really rocky, the path was quite close to the edge and there were a fair few hikers coming the other way. Once I cleared this section, I’d covered around 6 miles and had really hit my stride. I was strong, my legs didn’t hate me and I love a good descent so down I went.

…And Then Down all the Way Home

I left a few runners behind me but one lady caught me – she was so friendly and told me how well I was going. I was catching the guy in front too and generally just feeling really good. Another mile down and I realised that it was actually just down all the way back. The terrain was tricky at times but this didn’t stop me realising that I was having the time of my life. The views coming down off the top where spectacular, it was a really clear day and visibility was really good. Plus, I’d reached the summit and had felt strong. I caught the guy in front and then the next one. He was a local club runner from Wells. A lovely man that I enjoyed chatting to as I ran the last mile.

A Superb Way to Enjoy Running

My friend was waiting for me to check I was still talking to him as he was worried I wasn’t going to enjoy it. I think I said “OMG that was effing brilliant” as I reached him. I then opened the tank and hoofed it to the finish line. The photo says it all. I loved it. I loved the terrain, the scenery, the route, the challenge, the people – everything. People were lying on the grass enjoying a post race beer, the sun was shining and it was the best day ever. Will I be running a fell race again? You bet I will!

My Top Tips for Running a Fell Race

So… onto the next one and I can’t wait! The only trouble is will it be Skyrid, Cader Idris or something else – I am still researching at this stage.