Tips and Advice for Running with Your Period

Tips and Advice for Running with Your Period

As a female runner, I have suffered terribly at the hands of my menstrual cycle to the point where I have messed up a few shorter races and a marathon! For years now, I have entered races, only to have them completely overwhelm me and stop me in my tracks, for a while with no idea why! Then, thanks to the fact that I, and my coach, started tracking my cycle and understanding it, I was finally able to get on top of the issue and work around it. With this in mind, I decided to put pen to paper and write about this somewhat taboo subject in the hope that it would help others to understand and recognise the impact our cycle can have on our running and how to plan around it. If you are male and squeamish look away, if you are female and want a greater insight, or just some tips on running with your period, grab a cuppa and read on…

Before I start – can I just say that I am no expert but I am a female and I do run and I do have experience of suffering at the hands of my period so this is based on my own findings.

How Did Periods Affect My Running?

It was a while before I started to realise how my menstrual cycle affected my running. Largely because I was on a contraception which stopped my periods. In fact, until I stopped taking my contraceptive pill, I was running strong, regularly getting PB’s and doing OK. once I stopped the pill and my cycle returned, then my problems began. The first hint that something was wrong was one day while I was running a 5 mile prom race. I got the most terrible cramps at halfway and was unable to finish. My heart rate had gone up up stupidly and I was struggling to get in the air while running.

At this stage, I just put it down to something viral. However, the same thing happened again during a tempo session a few weeks later and then again the following month during a 10k PB attempt. On two of the three occasions I was being coached/paced and therefore analysed the situation perhaps more than I usually would. A pattern started to emerge as my period would arrive 2-4 days later. However, when my period actually landed I could run without bother (at this stage anyway). Being able to recognise this meant that I could adjust my training pattern and avoid entering races at the worst time of my cycle.

This was OK for a while until the cycle became erratic and would turn up earlier than planned. One day, during an ultra, at the 10 mile point I was struggling. My heart rate was higher than normal and I felt rubbish. I declared I was unable to go on (I got over that after a few minutes of getting myself together and finished). Having planned ahead though (meaning I did have tampons with me) this didn’t thwart my 30 mile attempt. I finished strong. This was the point when I started to be able to build a picture of my body and how it reacted during various points of my cycle. Basically – from 4 days prior until the moment the bleeding starts, I could forget anything that required a lot of effort. Difficult when my periods were now every 21 days or 24 days or 27 days, or whenever they decided to turn up. 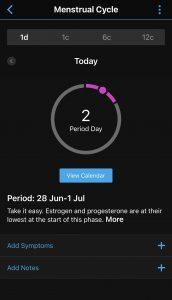 Use Garmin to track your cycle

Throw in the Early Stages of Perimenopause

This warrants a whole article of its own but I thought I’d throw this in for all of you in your mid to late forties.

You see, after finally understanding and learning to live with my cycle for a few years, at 45 I started experiencing strange symptoms that I wasn’t used to. Anxiety from nowhere, hot flushes, absolute exhaustion, insomnia and bleeds that went on for weeks. This all happened while I was training for Newport Marathon – another good for age attempt that never was.

The doctor gave me Norethisterone to stop the bleed and I ran the marathon. This wasn’t before I’d had a full blood count and numerous other tests. The marathon was hard. The hardest I’ve done of all my races. I spent the last few miles walking, crying, stropping, calling my friends and generally hating marathons, Newport and the world. Having struggled a little in training, I found long runs like running through treacle. I put this down to training through the summer months though.

A few days after this marathon and convincing myself I was done with running, the doctor called me and told me I was anaemic. I mean.. something so simple but that had made me feel so terrible. Anyway I wasn’t done with running. Iron tablets, tranaxemic acid, scans etc. and now my periods have settled down. I went on to complete my next ultra and all the training runs without a hitch.

All of this led me to research a lot about perimenopause which I believe I am now experiencing and menstruation as a whole. My current read is Menopocalypse – How I Learned to Thrive During Menopause – great book! Anyway, I digress – back to periods.

Top Tips for Running with Your Period

You can even programme it into Garmin. Recognise the symptoms of your cycle too. We are all different.

Be Flexible With Your Plan

If you feel overwhelmed and can’t face that tempo/long run then bin it off! Change your schedule around and go for a few easy miles if you don’t want to miss the run entirely.

While treats are allowed, be kind to your body with healthy food and snacks. While you may feel like smashing carbs down your neck, healthy salads, plenty of veggies and some wholesome meals are a winner.

Drink plenty of fluid to replace any that you are losing.

I tend to turn into an insomniac around the time of my period so I spend a lot of time napping after runs, sleeping when I can and resting when I’m not ferrying my kids around. If you’ve got a long run planned, plan an early night and do all the things that relax you. Today for example I have my period – I napped from 4.30 until 5.30pm (luckily I work for myself). I felt terrible before – now I am wide awake, it’s 8pm and I am happily tapping away on my laptop.

if you’re just feeling a bit meh go for the run – the endorphins will snap you out of it. A few easy miles may be just what you need.

Always carry tampons (or menstrual cups if you use them) – you just never know!

It’s OK to sit on the couch with a hot water bottle for the cramps eating the chocolate/cake/icecream – you know this helps! Running isn’t going away!

Be Kind to Yourself

You are not going to miss a PB if you miss a training run but you could risk damage it if you overdo it.

General Advice for Running with Your Period

If your periods are really heavy/painful etc. don’t just suffer and put up with it  – see the doctor. If I hadn’t when I did, I would not have realised I was anaemic and might still be struggling now.

Also, if you have a coach don’t be embarrassed to discuss your cycle. My coach is male but he understands so much more about the challenges of female athletes from my experiences. It’s not something to be embarrassed about.

Is it Safe to Run?

If you’re new to running and wondering if running with your period is safe, then it absolutely is (unless medically advised otherwise). In fact, it’s good for you. As long as you are comfortable with a tampon or cup (pads really chafe) then go for it. Obviously be mindful that if you are running long, you may experience leakage. Just wear appropriate clothing. You can get period underwear (I can’t endorse this as I have never tried it but some people rate it and these ones pictured below have lots of good reviews).

Running with your period is ok as long as you feel ok. There will be times when you just can’t face it and you may want to switch out your hard efforts or long runs on the heaviest days of your cycle. Just go with the flow (and I apologise for the unintended pun).

Study On The Menstrual Cycle And Athletic Performance

If you would like to read further and delve more into the science, Trail Runner Mag have published this really interesting piece from a December 2021 study. Definitely worth a read!

It’s also starting to get media attention from the likes of Dina Asher Smith who pulled up during a race due to unexplained cramps. This later turned out to be all to do with her cycle. She, amongst others, are now calling for greater research and awareness of how the menstrual cycle affects female athletes. The thing is, there is no shame in it. As a female coach, it is one of the first things I discuss with an athlete and I encourage male coaches to do the same. If you are serious about your running and want to get the best out of yourself, it’s important for the athlete and coach to be able to discuss this without embarrassment or fear. I was extremely lucky to find a coach that understood and was willing to learn alongside me how this monthly cycle impacted my running.

Please note – I am not a medical expert and all of my advice is from my own experience. If you are worried about your periods or have cause for concern then you should consult your GP. If you have any tips about running with your period feel free to comment.

Disclaimer: Our posts may contain affiliate links. We may earn commissions if you shop through the links on this page although we only ever recommend products that we genuinely believe will enhance your trail running experience.