The Difference Between Trail Running and Fell Running

The Difference Between Trail Running and Fell Running

Have you ever heard the term fell running and wondered what it means? The hardened runners among you will have a good idea. For those of you that aren’t so sure, we are here to explain the difference between trail running and fell running.

Trail running refers to running a specific trail. Often these trails are named – you may have seen the little signs on gate and fence posts for example. These trails are often historic and have been used by hikers and runners for many years. Here on the Mendip Hills, we have the Butcombe Trail, the West Mendip Way, the Limestone Link, the Mendip Ring and more. Some of these trails are as much as 100 miles long and cover at least one or more counties. The trails are clearly marked and used by many with regular sign posts to denote where the trail leads and you can often find them on OS maps etc.

Unlike trail running, and particularly in a race, a fell route is  unmarked and self-navigated. Generally during a fell race, you are required to run between checkpoints using the easiest, shortest, or most obvious route. There’s a lot more elevation too over a shorter distance.

If asked the difference between a fell and a mountain, they are one and the same. The world fell is largely used in the Lake District where there are no shortage of them. The word comes from Old Norse – fell/fjall meaning mountain. it is used to refer to common ground above the tree line.

A trail means you don’t deviate from the path, whereas, a fell means as long as you get from A to B, it doesn’t really matter how you get there. GPX watches are frequently used in trail races, with organisers often providing a route for runners to upload onto their watches in advance. These type of devices are usually banned from fell races, with runners only permitted to use a map and compass and any local knowledge they may have to complete the course. 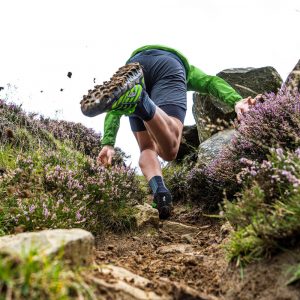 Interesting fact – The sport of fell running actually emerged from shepherds and guides racing alongside other sports like wrestling at annual games events held in Lakeland towns and villages.

Of the two, fell running could be considered  tougher as you are often taken off the beaten track on unmarked trails. You  can end up running over hills, through boggy terrain and scrambling over scree. I certainly find that I need to have my wits about me on rugged paths and descents. Get a mist up on top of a fell and you are going to find it tricky to navigate if you aren’t experienced. This is why there is so much emphasis on having the right kit. You need to be prepared for all eventualities.

However, trail running can also be just as tough, particularly if you take part in one of the many ultra events now available, running 50 miles is hard, irrespective of the terrain. However,  the marked  trails can make this  easier and place less emphasis on navigation skills.

Given the need to navigate your way between points with fell running, it could be said its not for the faint hearted or the beginner. It requires a good sense of direction and competent  map reading skills.

Let’s not discount the mental and physical strength required for trail racing though. One of the toughest races on earth is the UTMB Ultra Tour of Mont Blanc – it covers 170 metres and over 9500 metres of ascent. You will find in England though that most of the mountain races tend to be more traditional fell races though. 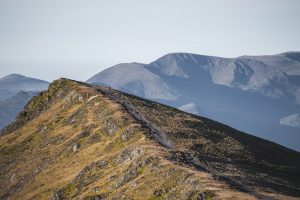 Fell or mountain runner running along mountain side in Lake District, Cumbria, UK

Fell races are often shorter and include more elevation relatively speaking. It’s not uncommon to run a fell race that goes up one side of a Welsh mountain or English peak and down the other. The FRA (Fell Runners Association) was set up in the 1970s to oversee the sport and has been going strong ever since. Fell races can often be as little of 5 miles, but  make no mistake, they often consist of gruelling elevation where even the toughest  runners can take twice as long as average to run a mile. Trail runs, by comparison, when developed as races, are often longer, covering most or all of the trail. Most ultra-marathons are run on specific trails.

Fell races don’t tend to have as many entrants or be as widely publicised. they have smaller fields, are less commercialised and don’t involve medals and t-shirts. You turn up on the day, pay your nominal entry fee and off you go. the sport of trail running can be more commercialised with expensive ultramarathons which are widely publicised by comparison and often put on by large event companies. For the hardy, more traditional runner, a fell race is preferred.

Are You a Trail Runner or a Fell Runner?

To be honest, if you are anything like us, you probably enjoy both. I have run fell races, most recently Fan Y Big in the Brecon Beacons. At 10.3 miles and 2,200 feet of elevation, it is not one of the toughest trail races however you are required to summit within a certain time and you do have to have your wits about you, and your climbing lungs, to cope with the 2/3 miles of climb up to the summit. Running along the horseshoe is something else too – looking around you and seeing a view that takes your breath away. I also love trail running – nothing beats a long run on a Sunday on the local trails. It’s safe to say, there’s nothing quite like the buzz you get from both.