5 of Our Favourite Trail Running Documentaries

5 of Our Favourite Trail Running Documentaries

If you’re a runner then there won’t be much about running that doesn’t capture your attention, especially good trail running documentaries. We love to follow the inspiring feats of endurance athletes as they put themselves to the test in ultra marathons and endurance challenges. We often find ourselves searching Netflix or YouTube for the latest. The trouble is, once you start watching one, you find another and then another… Not all of them have the same impact but there are some that just leave you wanting to lace up your shoes and head for the trails. Anyway, if you find yourself at a loose end, or want unwind and eat cake after a long run, here’s a few of our favourite ultra marathon documentaries for you to sit back and enjoy.

The Barkley Marathons – The Race That Eats Its Young

Each year, 40 of the most supreme, hard core or just plain crazy endurance runners, descend on a small town in Tennessee to pit themselves against the Barkley Marathons. The full course is 100 miles long and if runners complete 60 of these miles, it is termed as a “fun run”. In it’s 30 year history, only a handful have managed to finish within the cut off time of 60 hours!

The Barkley course was designed by Gary “Lazarus Lake” Cantrell and was inspired in 1977 by the escape of James Earl Ray’s 1977 escape from the Brushy Mountain State Penitentiary. he famously covered 8 miles of the woods running a total of 55!

The race has a limit of 40 runners and proves very popular with those who think they are tough enough to give it a go. It’s all a closely guarded secret with nothing advertised publicly. If you want to enter, you have to compose an essay about why you think you should be allowed to run the Barkley Marathons. The whopping entrance fee of $1.60 is also payable up completion of requirements to enter. Letters of condolence are sent to the successful entrant! if it’s your first time, don’t turn up without a vehicle license plate from your home town/state or you won’t be able to enter. Race bib number one is given to the least likely to complete one of the 5 laps that make up this 100 mile course.

If you do happen to make it as a finisher, you will have achieved around 54,200 feet (16,500 m) of accumulated elevation over the 100 mile distance over a course that regularly changes. There are no aid stations – just 2 water stations so you better be prepared and you better be able to navigate.

Watch in awe as Nikki Kimball attempts to become the fastest woman to run the Long Trail, America’s oldest hiking trail in this ultra marathon documentary; Finding Traction. Follow Nikki on her 273 journey as she tests herself to the limits.

Learn about Nikki, her relationship with ultra running and what led her to this remarkable challenge. It’s 56 minutes of your life well spent!

Life in a Day – Billy Yang

This ultra marathon documentary is one of many produced by Billy Yang, an avid runner himself. It documents 4 remarkable women, Magdalena Boulet, Kaci Lickteig, Devon Yanko and Anna Mae Flynn as they undertake the Western States 100 in 2016. Billy was drawn to these particular 4 women and their stories in a sport that he felt was underrepresented in the media. He ran parts of the course with them, filming them as well as documenting their stories and what led them to the start line. 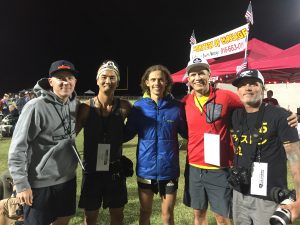 Yang and his production crew, with Jim Walmsley, at the finish of Western States 2016. Photo courtesy Billy Yang.

The aim of the film is to show the strength that these women bring to the challenge and to inspire others to follow in their footsteps. If you’ve got an hour to spare, give it a watch!

Running for Good is the story of Fiona Oakes in an inspiring documentary in which we follow her as she prepares for, and undertakes, the Marathon Des Sables. Her goal is not only to complete the “toughest race on earth” but also to set a record while doing it. Fiona is the fastest woman to complete a marathon on all 7 continents and her story is inspiring. What makes this story even more extraordinary is that, at the age of 14, Fiona was told she would never walk properly. After numerous knew surgeries, not only does she walk, but she also runs ultra marathons!

Her outstanding achievements help to fund her animal sanctuary and its 450+ inhabitants which she takes care of. Have a watch and get inspired!

Having only been run once before, the Dragon Back Race took place for a second time back in 2012 with 84 endurance athletes looking to complete 300km of brutal mountain running along the mountainous spine of Wales. Follow these inspiring runners as they battle blisters, fatigue and their own mental challenges in one of our home grown trail running documentaries.

Of course, this is just the tip of the iceberg when it comes to trail running documentaries. We have watched plenty on YouTube and Amazon. It’s often followed by a conversation about what we want to do next. We’d love to hear your recommendations on trail running films and how they inspired you.

As an Amazon Associate I earn from qualifying purchases