On Saturday January 23rd, 2021, at 7am in Phoenix, Arizona, 40 Hoka athletes including Jim Walmsley and Camille Herron will take on the 100k world record attempt in Hoka’s Carbon X 2 Project.

Raced on Opposite Sides of the World

Additionally, the event will take place in Chiba, Japan where the Japanese athletes, unable to travel to Arizona under Covid restrictions, will also have a crack at breaking the record. While the lineup for Japan hasn’t been released, their race will be long finished by the time the US version starts with both races starting at 7am local time.

Jim Walmsley and Camille Herron, both hoping to break the 100k world record, currently hold the 50 mile world records for male and female respectively, and will take part in the Phoenix event taking place on a specially designed 11km track.

Will Walmsley go Under 6 Hours?

While the aim is to break the record, there has been some talk about whether Walmsley can equal his 50 mile WR pace to bring his time in under 6 hours. This will be quite some achievement and will require the athlete to run a 5:48 mile pace for 12 more miles than his 50 mile record. To beat the 100k world record, he will need to run at a 5:56 pace.

Similar to the Nike Breaking 2 project, Hoka are hoping that their new super shoe, the Carbon X 2 can have the same results. Walmsley, after all, did break the 50 mile record in the shoe’s predecessor the Carbon X. 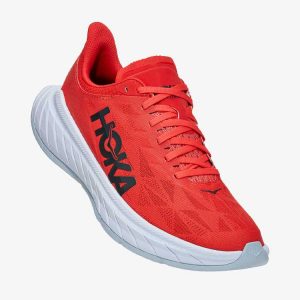 Britain’s Carla Molinaro, who currently holds the LEJOG record, will also take part in Phoenix, hoping to beat the British record of 7hrs 27mins 19secs which was set way back in 1993. Her plan is to “hang on and hope she doesn’t die” – a plan we can personally identify with.

The Full Line Up

While the Japanese athletes are yet to be released, athletes that will line up to start in Phoenix, Arizona are:

How to Watch the 100K World Record Attempt

To watch, go to hokaoneone.com, where the US event will be live-streamed. Coverage will start at 2pm (UK time). We know what we will be doing tomorrow afternoon!

Disclaimer: Posts may contain affiliate links. We earn commissions if you shop through the links on this page. As an Amazon Associate, we earn from qualifying purchases. We also promote other products that we have tried and tested via other affiliate programmes.