A Tale of Two Head Torches

A Tale of Two Head Torches

There’s something magical about being on top of a hill away from noise and artificial light pollution with just the stars for company. During winter we often head out for shorter runs in the dark for this very reason. Obviously a head torch is a main requirement unless you are very brave or stupid. It was during our most recent night time trail run that we were discussing the difference in price and the effectiveness of our two head torches. We decided to pit them against each other to find out which is the best running head torch.

One of us had invested in a well known brand, the Petzl Reactik (now replaced by the Petzl Swift). The other one of us had opted for a cheaper head torch from Amazon. There are many head torches on the market from brands such as Ledlenser and Petzl that have high lumens and a longer battery life. However, if you just want to do the odd head torch run, or want a back up, you can opt for something that costs less.

Which is the Best Running Head Torch of the Two?

While running along side by side, it’s quite hard to tell whose head torch is giving off the most light and to describe the kind of light they give off. To settle the debate we conducted our own little experiment. I’d just like to point out at this point that it was -2 degrees with a freezing cold fog and we weren’t much in the mood for hanging around for too long, just in case there were bears you understand. We did manage to get these two very different sets of photos though. 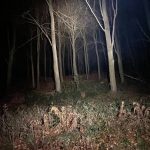 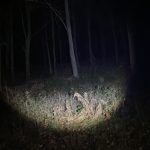 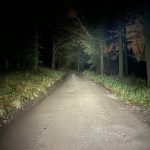 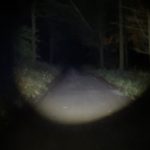 The first two photos compare a view into the woods and the second two, the track ahead of us using the Petzl head torch and the Kingtop. One of us turned our head torch off while we took a photo of the light ahead. No flash was used, we both stood in exactly the same spot and photos were taken from the same angle. What a difference! The Petzl clearly has a much wider range as opposed to the more tunnelled beam of the Kingtop.

The Kingtop, while it goes over the head, also has a battery on the back. This makes it heavier than the Petzl and not a torch you’d want to carry in your kit. This particular torch does have a useful feature of omitting a red light at the back. This is useful if you are running with people that want to see you ahead of them. It is also not quite so well constructed as the Petzl and the front comes unscrewed quite easily. It does angle, but when you move it around, you don’t quite get enough light.

There are 3 settings – bright, not so bright and flashing – for those occasions when you want a disco on the top of the hill ;-). The Petzl has different brightness settings with 900 lumens max output. It is much lighter, smaller and ideal for carrying in your kit. It comes in three colours, blue, orange and black, and is comfortable to wear. In this case you really do get what you pay for and my Kingtop is being upgraded to a Petzl Swift in the next few weeks. In conclusion, when considering which is the best running head torch of the two, it has to be the Petzl. 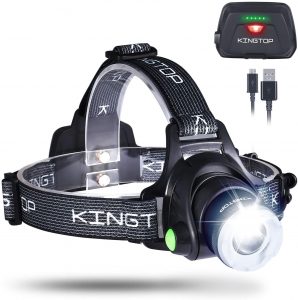 Just in case you were wondering… after many head torch runs using these particular models, neither of us have yet encountered a bear. There was a group of wild ponies which crossed the path in front of us. We have also heard the odd owl but no bears (or any other creatures eg. lions and tigers). In fact, night time running is one of our favourite ways to explore the beautiful trails from a completely different perspective.

Disclaimer: This article includes affiliate links which may provide a small commission to me at no cost to you. The products we recommend are either those that we’ve used or that our fellow runners have used.