I love trail running – it never lets me down. I can go out and pound out the miles on the road but I don’t get the same fulfilment as I do from going off road and getting lost in my thoughts for an hour or more. In fact, I didn’t think the satisfaction and pure enjoyment experienced from running off road could be beaten until I tried fell running.

How I Discovered Fell Running

My first proper fell race was Fan Y Big – 10 miles and 2,200 feet of climb to the summit and back down again through some of the most beautiful terrain. I loved it and the smile was written all over my face in my finish photo. On this particular day the weather was kind and it turned out to be pretty much spot on. I crossed the line saying “what can I do next”?

It was suggested that I try the Sugar Loaf Winter Fell Race. 6 miles – 1600 ft and another summit to conquer. This time I wasn’t as scared and I was a lot more prepared for what was to come. The only trouble is the weather was crap. So much so that the day before it was announced that the summit may actually be removed from the race and the course shortened. Fortunately it wasn’t and it turned out to be low vis at the top but other than that it could be termed as mild. I was feeling confident, even when the Race Director announced that 3 army guys had been rescued the day before!!!!

I decided I’d try and stick like glue to a fell runner that I’d chased last time – she knew what she was doing. She has this technique of walk running the really steep climbs in equal measures never letting herself get into the red too early. So, I did that – in fact I overtook her feeling really strong half way up. She soon showed me who was boss nearer the summit as I started to regret my life choices. She disappeared out of sight leaving me slightly concerned that I might be going the wrong may as I started to descend into a fog.

I’d had a time in mind of around 1 hours 20. That was what I’d like to finish the race in. I figured that was not too shabby for a newbie fell runner. As it was I felt so strong made the summit in less than 45. I knew I could descend at pace if the terrain wasn’t too technical. 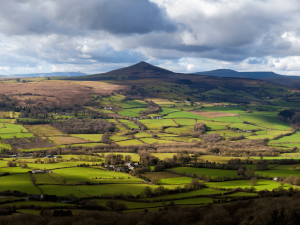 It’s safe to say that the descent from the summit is nothing short of beautiful in every sense of the word and I was able to let go and fly down. I can’t properly describe the feeling of freedom and total euphoria as you come down knowing the tough stuff is behind you and it’s all downhill to the finish. I don’t think I stopped smiling. The feeling is indescribable. It’s like you know the worst is over and you can truly let go (making sure you don’t trip over a rock of course).

The visibility wasn’t amazing in places but the views that these mountains did offer were still spectacular. Breathtaking. I finished that race in 1:08 smiling like I’d won the lottery and wanting more.

Where the Magic Happens

I was once told by a sales trainer in my previous career that stepping out of your comfort zone was where the magic happened and that couldn’t be a more accurate description of fell running. If you haven’t ever done it and you fancy giving it a go, do it! You won’t regret it. You might cuss me half way up to the summit when you realise there is still a way to go but you will thank me after.

And then there is the price – £8 to run this race. £8 – no medal, no t-shirt but who cares? What can you get for that sort of money these days. Not much! And besides, the memories far outweigh any physical race souvenirs.