The View From the Front – Winning an Ultra Marathon

The View From the Front – Winning an Ultra Marathon

Some of us can only dream of winning an ultra marathon so we were delighted that our fellow club member, Kieron Summers, kindly agreed to write this blog in the after glow of winning the Dartmoor Discovery Ultra Marathon. Here, in Kieron’s own words, he describes what it’s like to partake in this popular South West ultra marathon and win it, not once, but twice!

A road ultra, not trail, but still pretty bumpy. A run I’ve now completed 3 times as my ‘reward’ to myself after a spring marathon.

The DD falls 5/6 weeks after my spring marathon so preparation in between the two is vital. Getting my legs ready for steady-paced climbing over a long time period will be my focus. A sub-4 hour time will usually mean a podium placing at the DD, the marathon training having already given the necessary endurance. However, 4000ft of climb obviously requires a decent block of elevation!!

Equally important as the physical preparation is the logistical/mental side. Many seem to ignore this: knowing the route, being prepared for tougher sections, so you can plan effort accordingly; nutrition strategy, there are 9 water stations where drinks/food can be placed; and the forecast weather, although being Dartmoor this is predictably unpredictable, driving rain followed blazing sunshine this year. Not the first time I’ve experienced this in the DD. All these contribute to your performance and getting these wrong, or ignoring them, and you’ll likely struggle unnecessarily.

I like to mentally split the run into 3 parts: a predominantly downhill half marathon from Princetown to Ashburton; a very hilly half marathon; followed by a bumpy 10k.

This year I was hoping to run a course PB, my previous best of 3:54:41 from 2017. To achieve this I’d need to half marathon in around 1:26 & marathon in 3:02 allowing for some slowing in the last 10k which is usually into the prevailing wind on tired legs. I also had the privilege of being defending champion, narrowly winning in 2019 by just 28 seconds, so was keen not to disgrace myself.

From the start the field immediately stretched out, within the first mile I found myself in a lead group of 3 with Rob and Dave, a former winner and long-time rival/friend, we didn’t see anyone else from that point. Dave soon pulled away and I followed about 10 seconds back.

The post-Covid return to racing was emotional, two near 50 year old blokes yelling with delight as we approached the first big hill at Dartmeet, a moment to remember. 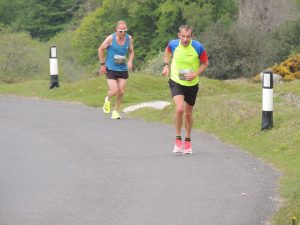 Pacing the First Half Marathon

On this uphill I caught and passed Dave only to be overtaken again on the next downhill. We continued like this, me overtaking on the ups, Dave retaking lead on the downs, until we reached half marathon distance in 1:25:30.

We were now at the bottom of the famous Ashburton hill, over 2 miles long and 750ft up. Here I pushed on and dropped Dave. Another 1.5 mile long hill soon followed, and to my surprise at a switchback at 18 miles I spotted Rob in 2nd place only a minute back! he’d pushed hard to stay in touch so I pushed again hoping to hold him off.

Luckily for me he’d overcooked it, fading from that point, eventually finishing 3rd. However, I didn’t know this and the focus of being chased got me through to marathon about 30 seconds over 3 hours, a marathon with approx. 800ft more climb than the Snowdonia Marathon. Not a bad start, just 10k to go!!

It’s fair to say at this point I was fairly tired but temporarily lifted at 27 miles seeing my family at Postbridge before the slog back into that wind to Princetown. I managed to keep going around 7:30 mile pace until 50k. Here the wheels fell off and knowing the victory was in the bag I relaxed and took the last two hills easy, even walking about 50 yards of each.

Crossing the Line with a New PB

My son, Finley, waiting at the top of the last hill ran with me for a while, before allowing me to finish alone, tired but happy in a course PB, 3:51:32, successfully defending from the 2019 win, 2020’s race being cancelled for obvious reasons. 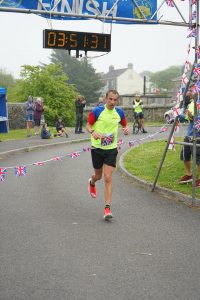 The DD is a tremendous race, I’ve really discovered things about myself each time I’ve run it, especially over the last 10k. I’d encourage anyone to give it a go. The organisation from Teignbridge Trotters is awesome and Dartmoor itself never fails to deliver.

Watching Kieron train, it’s clear that he gives 110% to everything that he does and it really is a pleasure to follow his running journey. He recently PB’d again – another marathon – another PB. In fact, those PBs keep coming for Kieron – proof that hard work, determination and commitment (plus an obscene amount of mileage) really do pay off! Thanks to Kieron for taking the time to share his experience with us.